Try the One Minute Mindfulness in the link below 👇


Posted by Patrick Baigent (Vimokshadaka) at 16:52 No comments:

Patrick
Posted by Patrick Baigent (Vimokshadaka) at 10:58 No comments:

The Mindfulness Process: A Guide to the Principles of Mindfulness, Relaxation and Satisfaction Paperback 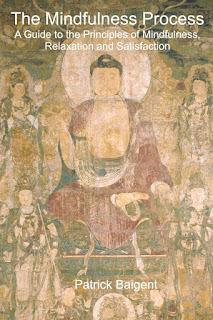 Relaxation or mindfulness individually, are only one side of the story. There is a key principle of reducing unnecessary effort. It combines with the four foundations of mindfulness. This becomes a single meditative process; 'The Mindfulness Process', a new perspective on the traditional buddhist path of satipatthana.Discover: the gears and orders of relaxation; why meditation improves our health; the importance of enjoyment and what tension or trauma may mean for meditation. The Mindfulness Process: A Guide to the Principles of Mindfulness, Relaxation and Satisfaction offers a buddhism and qigong informed model of relaxation for the first time, and reveals a radical new understanding of both mindfulness and relaxation.
Buy the book on Amazon or Lulu
Posted by Patrick Baigent (Vimokshadaka) at 05:09 No comments:

The Gears of Mindfulness: A Practical Guide to Mindfulness Therapy Paperback Buy the book on Amazon or Lulu

Posted by Patrick Baigent (Vimokshadaka) at 05:04 No comments:

"The Relaxation Principle" by Patrick Baigent

Relaxation fundamentally involves reducing unnecessary effort. This is a core working principle we can make use of in any path of development. Patrick Baigent explores how this principle works in Buddhism, meditation and training methods such as Qigong. The reduction of unnecessary effort is combined with mindfulness to become ‘the direct path’ of relaxation. Bringing together the great traditions of Buddhism and Qigong Patrick Baigent explores what relaxation really means and offers useful conclusions. Discover the five orders of relaxation, the six gears of relaxation, why meditation is a health training, how meditation becomes a psychological therapy, and what tension and trauma may mean for meditation. Discover how to work with relaxation in your own path and training. The Relaxation Principle offers a radical new understanding of the place of relaxation. Patrick Baigent has nearly twenty years of experience in Buddhism and Qigong and offers teaching, mentoring and coaching in Cambridge, UK


Many thanks! :)
Posted by Patrick Baigent (Vimokshadaka) at 16:32 No comments:

The Spectrum of Usefulness and Enlightenment.

I want to point out a distinction which I consider important for understanding the Mahayana and for avoiding a particular hindrance to enlightenment. My concern is that a certain wrong view leads us to be too busy, which I think stems from our understanding of how altruistic activity fits into Buddhism. We considered the Mahayana goal of Buddhahood to be merely a re-emphasis of the goal of full enlightenment.  However, it’s not difficult to see how this is a mistake. To become fully enlightened we do not also need to develop the extra abilities which make one a Buddha (like our historical Buddha) – for example, liberating yourself without the guidance of an enlightened teacher and successfully passing on that enlightenment to others. In fact, it should not come as a surprise that becoming fully enlightened does not mean you are suddenly going to be useful (like our historical Buddha). The problem, as I see it, is that our path to full enlightenment can be hindered by these mistaken views; they lead us to confuse the conditions necessary for our liberation with the conditions necessary for becoming useful to others. It seems to me that in reality the two goals represent two possible extremes on a spectrum of how much one is of actual benefit to others whilst gaining liberation. I.e. someone who is fully enlightened but not very useful to others and someone who is fully enlightened and is very useful to others.

Most importantly, more has been added in the Mahayana, explaining why the path to Buddhahood would take longer. This altruistic activity was never intended to be the direct path to a Bodhisattva’s enlightenment. It is not easy to see what is necessary for a particular person’s path. Extra altruistic activity can sometimes be helpful for a person’s path to enlightenment. One example of this is the story of Milarepa’s trials. However, those towers were not really built for the benefit of Marpa. There are several aspects at play here which we can easily confuse. For example, if we conflate enlightenment with ability we may expect someone to not be very enlightened just because they don't have very good social skills, or can’t give good public talks. Selflessness, altruism and altruistic activity need to be distinguished. Selflessness cannot actually be equated with usefulness to others; sometimes they overlap and sometimes they don’t. It seems to me that this really distinguishes the two goals. In terms of the goals of Buddhism we could say that they are characterised by a ‘spectrum of usefulness’ alongside the attainment of enlightenment; at one extreme there is mere enlightenment and at the other extreme there is enlightenment plus the fully developed ability to be useful to others. This has an early precedent in the Kitagiri Sutta which describes ‘liberation in both ways’. Perhaps this was an early example of what gradually developed into the Mahayana as the Buddha’s achievement began to be included in the schema of goals. We need to distinguish enlightenment from abilities as we see described in the Kitagiri Sutta if we are to both understand the Mahayana and avoid hindering our path to enlightenment. The movement’s approach to altruistic activity has helped it to grow, but now we should look more carefully our approach and even how we have been influenced by cultural conditioning, get the principle right and incorporate all aspects of ‘the spectrum’ correctly.
Posted by Patrick Baigent (Vimokshadaka) at 05:18 No comments:

Anti-intellectualism and the Spiritual Community 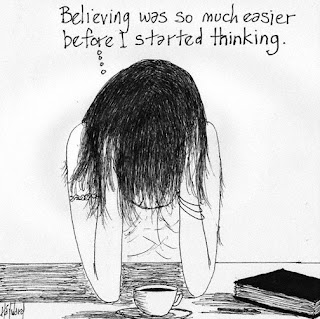 Posted by Patrick Baigent (Vimokshadaka) at 07:40 No comments: